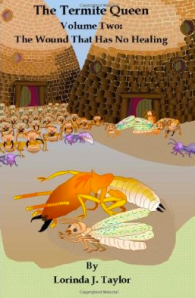 Readers familiar with the initial installment of Lorinda J. Taylor’s ambitious saga, The Termite Queen: Volume One: The Speaking of the Dead (386 pages, hard copy), know that Taylor is a vastly talented writer.  Happily, Taylor’s storytelling prowess doesn’t often falter in the mostly satisfying conclusion of her epic sci-fi adventure, The Termite Queen: Volume Two: The Wound That Has No Healing, itself a formidable undertaking at 572 pages.

Though the author modestly characterizes TQ as literary Sci-Fi, the description doesn’t begin to capture the full flavor of Taylor’s accomplishment.  Rather, in TQ V 1 and 2 the author serves up a tome that crosses genres as easily as her intergalactic cast of characters crosses from real-time space travel to temporal quantum space travel and back again.  In fact, the complete TQ saga is part traditional love story, part epic adventure tale richly seasoned with mythic and religious overtones, as well as copious references to literary classics (each chapter is introduced by a literary epigraph).  That said, it is not incidental that Taylor’s epic is set in the thirtieth century (2969—2971).  Hardcore Sci-fi aficionados will appreciate that Taylor’s literary recipe includes science so convincingly researched and/or fabricated as to concoct a perfectly plausible and believable future.

It helps that Taylor’s ‘future’ is inhabited by a cast of engaging and believable characters—human and alien.

Readers of TQ V 1 (which encompasses parts 1 and 2 of Taylor’s saga), will recall Kaitrin’s introduction as the up-and-coming young academic asked to study a giant termite specimen brought back to earth following a disastrous mission to the planet, 2 Giotta 17 A.  Not only does Kaitrin succeed in bonding with the terminally ill creature, she also cracks the termite’s electromagnetic language and in the process earns the respect and affections of renowned entomologist, enigmatic Professor Griffen Gwidian.  Kaitrin’s linguistic triumph secures for her a prominent position in the return expedition to the termite planet—an expedition to be led by none other than Professor Gwidian.

The couple’s romance comes to fruition during the weeks of deep-space travel recounted in TQ V 1.  A moving ceremony performed en route joins the couple in matrimony and provides a window into Griffen’s mind.  It turns out Taylor’s Gwidian is a man who harbors a deep personal secret, a burden so encrypted in guilt and secrecy that even Kaitrin—with all her intellectual and intuitive powers—cannot crack the code.

In both TQ V 1 and 2, Taylor employs alternating storylines that shift between what is happening among the members of the scientific expedition and the dramas unfolding within the termitarium.  It is a strategy that showcases the author’s ability to create fully realized personalities—a talent not limited to Taylor’s human characters.  Indeed, the author manages the same success with most of her aliens—beings as far removed from human sensibilities as Avians (witness the feathery and endearing Professor A’a’ma) and the termites of planet 2 Giotta 17 A.

For the most part, Taylor accomplishes this difficult task with her termites by presenting their storylines in screenplay format.  This narrative stance gives the author free rein to exercise complete directorial control down to the smallest detail of setting and characterization.  In fact, the author’s stage directions in both TQ volumes are so specifically ‘Taylor’ed to the individual termites that it is sometimes possible to tell them apart without glancing at the attributions denoting their complicated names.  By the time the scientific expedition nears the termite planet at the conclusion of TQ V 1, the reader has encountered most members of the termite cast.

Even before the scientific expedition reaches 2 Giotta 17 A, Taylor makes it clear that the termites are not immune to the power struggles that foment civil unrest, rebellion—and even murder—on earth.

It is at this point—just as the scientific expedition makes landfall on 2 Giotta 17 A—that Taylor picks up the action in Volume Two: The Wound That Has No Healing, which encompasses parts 3 and 4 of the TQ saga.  Indeed, the first 342 pages of TQ V 2 move, for the most part, at a pace snappy enough to keep the reader fully engaged and, at times, breathless with anticipation.

Soon after the expedition makes landfall, Kaitrin makes contact with Kwi’ga’ga’tei.  As her bond with the shaman deepens, Kaitrin’s understanding of the termite language, social hierarchy and customs, as well as their religious beliefs, increases.  But that is not all she begins to understand.  Indeed, Kaitrin senses the power struggle unfolding within Lo’ro’ra—a struggle that threatens her new friend’s authority.

What Kaitrin doesn’t realize is that the evil termite Chamberlain Mo’gri’ta’tu is the leader of a conspiracy to assassinate Kwi’ga’ga’tei, and that the ‘star beings’ expedition, and more specifically her own evolving relationship with the shaman, has placed her in the conspirators’ crosshairs as well.  Soon after Kwi’ga’ga’tei brings Kaitrin (literally) inside the termitarium—where she finds favor with the termite queen (A’kha’ma’na’ta) and her consort king (Sei’o’na’sha’ma)—the conspirators put their plans into action.

Taylor adds to this mix of tension and turmoil Gwidian’s increasing anxiety as his new wife undertakes risk after risk in the name of science—none more upsetting to him than Kaitrin’s ventures inside the termitarium.  Indeed, Gwidian’s almost pathological obsession with his wife’s safety—an obsession linked to the dark secret of his traumatic youth—fuels his increasing emotional instability.  Things literally begin to fall apart for him when, during what was to have been Kaitrin’s final visit inside the termitarium, the conspirators break into open rebellion.  With his wife in harm’s way, Gwidian, driven by his relentless internal demons, throws himself into the thick of battle.

As the termite rebellion concludes, Taylor finishes off part 3 with several gut-wrenching scenes replete with New Testament overtones and literary references (Shakespeare, Andrew Marvell, to name two)—allusions that will resonate with readers well-read in the classics.  Soon afterward, the traumatized ‘star beings’ abandon the termite planet for earth leaving much unfinished business in their wake.

Unfortunately, in undertaking the novel’s Part 4 conclusion, subtitled “Earth: Absolution,” Taylor relinquishes much of TQ V 2’s forward momentum.  She does so by straying from one of the cardinal rules of fiction: “show it; don’t tell it.”  It is a tendency that crops up from time to time in TQ V 1 as well, but which the author generally abandons after a few pages.  Not so in TQ V 2, Part 4, the focus of which is Kaitrin’s quest to: (1) uncover the dark secret responsible for her husband’s torment, and (2) find expiation for her role in the doomed mission to planet 2 Giotta 17 A.  Taylor chooses to ‘tell’ the story of Kaitrin’s quest almost exclusively in dialogue—i.e., pages and pages of conversation between Kaitrin and several women from her husband’s past.

It is unlucky that Part 4, with its enervating narrative stance, stretches to some 200+ pages—an authorial choice that vitiates much of the impact of Gwidian’s dark secret when it is finally revealed.  Equally unfortunate is the fact that the relentless dialogue actually retells much of Part Three, thus all but inviting the reader to skim.

Fortunately, Taylor breaks the tedium by offering a brief but emotionally satisfying epilogue to the novel—one that sees Kaitrin return to 2 Giotta 17 A for the resolution of her unfinished business with the termites of Lo’ro’ra.

Despite the lapses noted, TQ V 1 and 2 amounts to an impressive literary accomplishment.  Indeed, Taylor’s strengths are in evidence on nearly every one of the tome’s 958 pages.  Few writers are up to such an undertaking—one requiring as much meticulous, laborious attention to research and the fabrication of history, language, religion, and science as to a proficiency of narrative technique.  For the most part—and that is a great deal in the case of TQ V 1 and 2—Taylor lives up to the challenge.

Jack A. Urquhart is the author of several works of fiction, including So They Say Collected Stories.