Book Review: Kate Atkinson’s “Life After Life” and “A God in Ruins”

“When we read a story, we inhabit it. The covers of the book are like a roof and four walls. What is to happen next will take place within the four walls of the story. And this is possible because the story’s voice makes everything its own.”
–John Berger (b. 1926), British author and critic

I don’t particularly enjoy writing book reviews. What can one reader—let alone one functioning as an obscure blogger—say to another that is likely to influence his or her reading experience? Book reviews—even the most intelligent—generally boil down to opinion, which, as the saying goes, is the cheapest commodity in the world. And yet, I can’t help thinking that occasionally some books, and some authors, deserve a shout out from ordinary readers like me, book junkies who, unlike professional critics, do not receive comp copies (and are not remunerated for their time and efforts) and thus, have a real investment in the work they praise or pan.

I believe that Kate Atkinson is a writer who deserves as much praise as she can get; likewise, her latest novel, A God in Ruins, and its predecessor, Life After Life. Both novels present the reader with such an engaging, well-constructed—and challenging—literary abode that it is difficult to vacate the premises on the last page.

That said, I should confess that prior to a recent NPR piece featuring Gone Girl author Gillian Flynn’s enthusiastic take on A God in Ruins, I had never heard of Kate Atkinson. I expect that is because I do not often read detective stories, which, prior to the novels that are the subject of this review, had been Atkinson’s oeuvre. Indeed, I have since learned that her “Case Histories” mystery series, featuring Detective Jackson Brodie, has long been a worldwide best seller.

I suppose, then, it is understandable that some critics have deemed Life After Life and A God in Ruins dramatic authorial departures. However, to my mind, there is something of the sleuth’s energy in both of these works. That is because in both novels, Atkinson weaves a mystery—the mystery of what shapes a human life. In Life After Life—and to a lesser extent in A God in Ruins—metafiction is the literary device employed (and even manipulated) in scattering a trail of clues for readers to follow.

Life After Life
Atkinson’s protagonist in Life After Life (Little, Brown and Company, 2013) is Ursula Todd, the product of a rather ordinary upper middle class British family, circa early 20th Century. But there is nothing ordinary about Ursula’s life, and that is because Atkinson has given her more than one—more than one life, that is.

In fact, Ursula is given multiple contingent lives and destinies, each set in motion by happenstance or a sometimes seemingly offhand choice. The reasons for employing this literary device are surely open to debate. One might wonder, for instance, if Atkinson means to evoke the contingent nature of evolution (à la Stephen Jay Gould?) in creating Ursula’s many lives. Whatever her actual reason(s), it seems to me that Atkinson is content for her readers to sleuth out for themselves the meaningful summation of Ursula’s multiple incarnations.

A few examples: In an early chapter set in 1910, Ursula Todd is stillborn, the umbilical cord wrapped around her neck; and yet, in a subsequent chapter, the family doctor arrives in time to cut the cord and grant Ursula a chance at life. In another chapter, Ursula is dispatched by drowning; in still another, “darkness falls” when she plummets from a rooftop. Indeed, Atkinson displays considerable imagination in killing off her protagonist. Influenza, an abusive husband, suicide, and the WWII Blitz bombing of London, among others, are called into play. This, then, is the novel’s format, with Ursula dying only to be reborn to an alternate destiny—a destiny often determined by the smallest detail: the presence or absence of a pair of scissors or a pet dog, a chance encounter that happens or doesn’t, the choice to walk alone or with a companion.

In the hands of a less gifted writer, this strategy could prove tedious, even alienating. Yet Atkinson pulls it off (life after life) by constructing a completely believable, and more importantly, engaging space for the reader to inhabit—four walls and a roof, if you will, within the confines of which it is easy to keep suspending disbelief. The wonder of Atkinson’s talent is that she is able to maintain this suspension even when she (repeatedly) tears down walls to expose the artifice of her creations.

But what does it all mean?
Inevitably, the bag of clues collected in living with Ursula through each incarnation provides enough evidence to suggest an answer to the mystery Atkinson poses—i.e., how is a human life, any human life and destiny—shaped? To my mind, the obvious conclusion would seem that our destinies hang on the thread of our collective individual choices—that we are all participants in a kind of cosmic game show. A show that requires us to self-select from doors A, B, C, ad infinitum, and that guarantees, as it does for Ursula, that we will be shaped by the prize or disappointment of each choice. Not exactly a rocket science notion, I’ll grant. But as with so many works of art, it is the artist’s method, her process and technique, that makes the masterwork—not necessarily the message conveyed. So it is with Atkinson’s wonderful Life After Life. 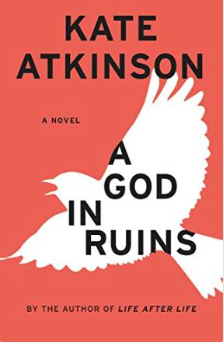 A God in Ruins
This reader couldn’t help but regard Atkinson’s most recent novel as a companion piece to its predecessor, Life After Life. Some of the evidence for this conclusion is obvious. For example, in A God in Ruins (Little, Brown and Company, 2015) Atkinson returns to upper middle class WWII British society and the well-to-do Todd family first encountered in Life After Life. This time, however, she resurrects Teddy Todd (Ursula’s brother, killed off in the earlier novel) to be her protagonist.

And yet, I believe there are other reasons to think of the two books as compadres. Both novels play with time; but rather than fashioning multiple lives for her god-in-ruins protagonist (à la Life After Life), Atkinson chooses to alternate between the various eras of Teddy’s one-and-only life. It is a literary strategy akin to moving between the rooms of a house.

Atkinson’s Teddy becomes a WWII RAF pilot responsible for carrying out dozens of bombing missions deep into Hitler’s Germany—missions in which tens, possibly hundreds, of thousands of civilians die. The novel tracks between Teddy’s nightmarish war-time experiences (often rendered in bloodily graphic detail) and his post war life as faithful husband (to wife Nancy), befuddled father (to unlikable daughter Viola), doting grandfather (to Bertie and Sunny), and decidedly unambitious small-town journalist. What is remarkable about the various ‘rooms’ of Teddy’s life—each of which the reader visits in separate but adjacent chapters—is that Atkinson sees to it that her ultimately passive, almost overly virtuous protagonist inhabits a space that the reader wants to share.

Again, for this reader, there is something of the mystery writer’s magic in this—skills that Atkinson surely honed via her previous detective novels. Why, for example, the curious reader may begin to wonder, does Teddy—whose WWII life was marked by adventures of the most bellicose variety—opt in his post war years for a life of quiet passivity? Why does he seem inclined to settle quietly into an old age home and death? What is behind Teddy’s unwillingness to explore the rooms where his daughter’s open hostility resides?

And speaking of Viola, what mysterious force drives her cruel treatment of Teddy, her blatant dismissal of a man so obviously good—and for that matter, her equally disparaging treatment of Bertie and Sunny, her own children?

Atkinson scatters her clues liberally, sometimes tossing them out (never casually or clumsily) whole chapters in advance. And again, it is left to the reader (as it should be!) to piece together the significance of the stories behind the story—which, as in every great mystery, turns on death.

For this reader, the gist of A God in Ruins boils down to how death—especially death encountered viscerally and in close quarters—impacts and shapes the living. And yes, this is an old trope—one well rehearsed and/or executed in countless works of fiction. But perhaps what makes Atkinson’s treatment so compelling is that she makes death the story within the story—within the story of life, that is.

Nowhere is this made more stunningly and movingly apparent than in the brilliant conclusion to A God in Ruins.

To say too much about how Atkinson manages this would be to spoil the beauty and the thrill of its discovery. It is enough to say that in exploding the walls—and indeed, blowing the roof off—of her creation, the author reveals its shared lineage with Life After Life.

That Atkinson can so thoroughly destroy and then restore the mystery and magic of an extraordinary work of fiction is part of what makes A God in Ruins such a marvelous literary construct. The novel is exactly the kind of place the serious reader (and writer) should want to inhabit—a place where the architecture is as magnificent as the architect’s skill in creating it.

Jack Andrew Urquhart was born in the American South. Following undergraduate work at the University of Florida, Gainesville, he taught in Florida's public schools. He earned a Master of Arts degree in English, Creative Writing, from the University of Colorado at Boulder, where he was the winner of the Harcourt Brace Jovanovich Award for Fiction (1991). His work has appeared online at Clapboard House Literary Journal, Crazyhorse Literary Journal, and Standards: The International Journal of Multicultural Studies. He is the author of So They Say, a collection of self-contained, inter-connected stories and the short story, They Say You Can Stop Yourself Breathing. Formerly a writing instructor at the University of Colorado’s Writing Program, Mr. Urquhart was, until 2010, a senior analyst for the Judicial Branch of California. He resides in southern California.
View all posts by jaurquhart →
This entry was posted in Uncategorized and tagged A God in Ruins, Book review, book reviews, contingent stories, Every Man Jack, Jack A. Urquhart, Jack Andrew Urquhart, Kate Atkinson, Life After Life, metafiction. Bookmark the permalink.