Posted on December 5, 2012 by jaurquhart 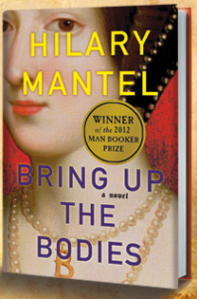 Mantel is more than gifted—she’s an outright genius. If you read her Man Booker prize-winning Wolf Hall, you’ll know what I mean. Bring Up The Bodies (also a Man Booker winner) continues the saga of Thomas Cromwell (chief minister to King Henry VIII of England, 1532 to 1540) as he patiently directs his brutally focused energies toward ending the failing marriage between Henry and Anne Boleyn.  In the process, Mantel spins a damn good page-turner of a story into “literature,” the mark of a true artist—which is by way of saying that Mantel’s sequel is every bit as compelling as its predecessor.

Happily, the author is at work on the third installment of her prize-winning Cromwell saga. Who knows? Maybe Mantel’s Man Booker run will go three for three.