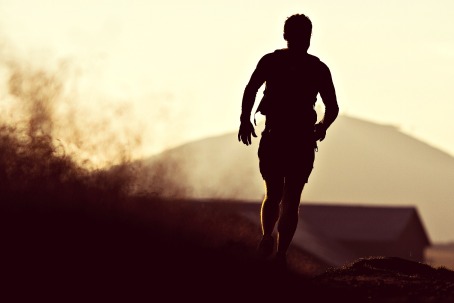 Come Sunday morning,
he runs the streets,
pants and puffs past houses
familiar since kindergarten,
the former homes
of former friends.
Instead of Sunday School,
he attends the alleyways,
side-steps puddles behind the VFW,
its parking lot redolent
of the last Supper:
barbecue and corn on the cob,
stale beer, soured potato salad.
Come the Sabbath,
instead of hosannas,
he raises a dust,
sprints the bricked streets,
those WPA relics
of his Grandfather’s time,
moldy as Methuselah.
In lieu of Jee-suz,
he follows a sweaty pace,
celebrates human sacrifice
in his own slogging way,
conscious that every year
makes him slower,
every stride closer
to the finish line.
And yet…
from now until then,
there are watercolor sunrises
and Cinderella moons,
silver-slippered
on the steps of dawn;
there are humid mornings
dank as high school locker rooms,
and cocks and crows in the city park.
All this, even if there is no point,
nor hope of understanding,
nothing that can decode
the mystery of a beating heart,
or what spins stars, planets
and human beings ad infinitum
into the vastness of space.
Nevertheless…
Come Sunday morning,
he runs the streets,
senses tuned to the divine
against the off-chance
of a sudden revelation.

Jack Andrew Urquhart was born in the American South. Following undergraduate work at the University of Florida, Gainesville, he taught in Florida's public schools. He earned a Master of Arts degree in English, Creative Writing, from the University of Colorado at Boulder, where he was the winner of the Harcourt Brace Jovanovich Award for Fiction (1991). His work has appeared online at Clapboard House Literary Journal, Crazyhorse Literary Journal, and Standards: The International Journal of Multicultural Studies. He is the author of So They Say, a collection of self-contained, inter-connected stories and the short story, They Say You Can Stop Yourself Breathing. Formerly a writing instructor at the University of Colorado’s Writing Program, Mr. Urquhart was, until 2010, a senior analyst for the Judicial Branch of California. He resides in southern California.
View all posts by jaurquhart →
This entry was posted in Uncategorized and tagged Every Man Jack, Jack A. Urquhart, Jack Andrew Urquhart, Prose poem, Prose Poetry, running, running poems, running stories. Bookmark the permalink.