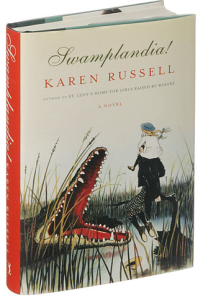 Karen Russell, the gifted author of the debut novel Swamplandia!, has been making quite a name for herself the last few years.  In 2009 she received a 5 Under 35 award from the National Book Foundation and last year she made The New Yorker’s 20 Under 40 list.  And yet, a first taste of her Pulitzer-nominated novel Swamplandia! might seem to suggest a brackish cup of bog water to readers whose conventionally refined palates do not bend toward bizarre ingredients.

Consider the Sawtooths, a family of lily-white Ohioans pretending to Native American tribe status (The Big Trees) on their backwater island in the swamps of South Florida.  The Sawtooths, who run the second-rate, failing tourist attraction referenced in the novel’s title, join the growing list of eccentric family-centric best sellers of the last year (Kevin Wilson’s wonderful The Family Fang springs to mind).  But indeed, one would be hard pressed to find a stranger concoction of weirdos than Russell’s alligator wrestling, Ouija board reading Big Trees—and that is before she throws in a balding bear named Judy Garland, a bird man whose expertise is crow removal, and an amorous ghost named Louis Thanksgiving.

Granted, the mix sounds like a dish best enjoyed by readers with an acquired taste for the outré, and in less skilled hands that might be true.  But Russell is an extraordinarily talented literary chef who seasons her Sawtooth saga with a smattering of suspense, a soupçon of eccentric comedy, and a dash of myth that is at all times hauntingly engaging—and even enthralling.

The author’s recipe for success starts with bringing the Sawtooth children forward as her central protagonists.  The trio, two sisters and a brother, take center stage after the cancer-related death of their mother, Hilola, formerly Swamplandia’s star attraction.

There is Ava, an eleven year old alligator wrestler in training who aspires to replace her mother as Swampladia’s main attraction, her sixteen year old sister Osceola whose boyfriend just happens to be a ghost named Louis Thanksgiving, and their eighteen year old brother Kiwi, whose common sense leads him to flee Swamplandia for a rival theme park, but whose lack of social skills seems at times to suggest Asperger’s syndrome.  Any one of the three could easily carry an entire novel, but in Swamplandia! Russell stirs them in one at a time alternating her point of view regularly to tease the reader’s appetite for turning pages.

Ava, the novel’s only first-person narrator (her siblings’ stories unfold in third-person), is the roux that holds Russell’s story together.  When her sister Osceola elopes into the Hellish deep swamp (the notion of a mythic Hell runs rampant all through the novel) with her fiancé, the ardent and very much deceased Louis Thanksgiving, Ava sets out on a risky rescue mission that alternates a child’s desperate and at times comically private myth-making with just enough danger to keep the reader on tenterhooks.

By novel’s end, Kiwi, who has become a star attraction in his own right at a more successful theme park (the aptly named ‘World of Darkness,’ where customers are called ‘Lost Souls’ and enjoy attractions the likes of the ‘Vesuvius Blast Off’ while chowing down on Hellishly hot ‘Dante’s Tamales’) joins his sister in her mission of rescue.  In the interim, Ms. Russell spins a family story that seems determined to keep readers wondering what (in Hell) it’s all supposed to mean.  Hint: all three of the Sawtooths seem to be haunted—in a good way—by their mother’s spirit.

It doesn’t hurt that Russell dishes up a banquet of colorful prose and dialogue along the way.  Consider this example of the latter between father (Chief Big Tree) and son (Kiwi) when Osceola develops a sudden attraction to a Ouija board summoned ghost:

Chief Big Tree: at least she’s not wasting time with “some mainland jackass with a motorcycle” he argues, or, “some loser with an earring”; to which Kiwi replies: “Could it not perhaps be better, Dad? … that’s the bright side here, that the dead man does not have a piercing?”

The exchange amply demonstrates Russell’s skill at showing, instead of telling, and it is but one of many examples of Russell’s art that makes Swamplandia! a literary delight to any reader willing to savor its unconventional ingredients.