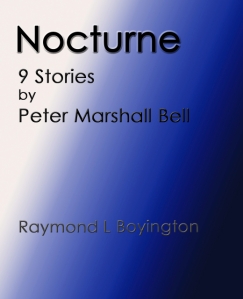 Full Disclosure: When my spouse Raymond L. Boyington undertook the editorial role in bringing his former partner’s work to print posthumously, I had not expected to play a role in promoting the finished product.  I had read previously a few of the poems penned by Peter Marshall Bell, who died in 1994, but never any of his heretofore unpublished fiction.  Indeed, save for a minor role in translating one of Bell’s stories from the original French to English, I thought it best to keep my distance from a project that was deeply and privately motivated.  In short, I did not wish to intrude on the editor’s labor of love.

All that resolve vanished when I sat down to read Invitation to the Voyage, the Selected Poems of Peter Marshall Bell, and more recently, Nocturne, the slim volume of his nine stories.  I confess this latter enterprise left me reeling with a sense of loss.  That is because on every page was the evidence of a talented writer evolving toward distinction—an advancement in artistry that continued literally to within a few whispers of Bell’s untimely death from the complications of AIDS at age thirty-five.  Indeed, part of the pleasure and the sadness in reading Nocturne lies in witnessing the progression of Bell’s talent (the nine stories are presented in chronological order, 1979—1990).

The author’s early tales, most notably “The End of Tribute,” “Nocturne,” and “The Enemy,” introduce Bell’s lifelong thematic obsession: the human struggle toward wholeness and personhood, a battle that for many—gay and straight alike—pits a survivor’s instinct against the forces of an externally motivated self-hatred.  It is a struggle that presents formidable and particular challenges for the homosexual and latent homosexual protagonists peopling Bell’s fiction.

Interestingly, the early stories sometimes mirror the author’s own history of personal and familial strife.  Witness Bell’s story “The End of Tribute,” in which Walter, the gay protagonist engaged on a Sunday afternoon tour of Paris’s Père Lachaise Cemetery (Bell lived in Paris, 1985-86), is inspired to consider his own losses while standing at the grave of the American rock star, Jim Morrison.  Reflecting on the lyrics of Morrison’s classic Vietnam era anthem, “Riders on the Storm,” Walter muses on his rebellious sister’s untimely death (Bell’s own sister died quite young)—and the resulting familial fallout:

“Oh, sister!  She had been the only one in the family who rallied to that music’s cry.  She had angered her family by rejecting accepted American values like fighting in Vietnam.  Now she was dead.

“I hated her,” his older brother had told him, years after … and although they’d drunk plenty of scotch before Ed let this out, Walter realized … a brother hated his sister in defense of his America.  Let him have his America, Walter thought angrily.  Standing before that grave, he knew his sister had been right.”

In the collection’s title story, “Nocturne,” Bell’s thematics find expression in a child’s early recognition of unacceptable difference amply cued by parental disappointment.  Perhaps drawing on personal experience, the author offers almost a case study of how children may internalize and process—usually at the expense of their psychological well being—a steady diet of subtle and not-so-subtle censure.  In “Nocturne,” the resulting damage is manifested (initially) in secrecy and insomnia:

“The important thing was not to be discovered.  His insomnia was his secret world—the fear that kept him awake was unknown to all those around him… He especially feared the derision and admonition of his father, who would only interpret his insomnia as a sign of cowardice and weakness.  “Like a little girl,” he imagined his father commenting with a sneer.”

Indeed, the impetus to avoid discovery drives several of Bell’s protagonists to self-harm—as in “The Enemy,” where two men, complete strangers from opposite sides of a war zone, meet, and manage to bridge their political and cultural chasms in a few moments of almost romantic sexual congress—before one of them self destructs.

These early stories by Bell, an untrained writer whose natural storytelling gifts appear to have been honed through years of rigorous intellectual pursuit and curiosity, showcase a writer’s steady progress toward proficiency, understanding (of the human condition) and a command of language (several languages in Bell’s case).  It is an evolution that reaches its apex, in my opinion, in Bell’s final four stories.  My particular favorite is the wonderfully full-bodied “We Have Always Been the Same Person”.

That the term ‘full-bodied’ should so perfectly apply to a ‘ghost story’ is one of the delightful ironies of Bell’s mature fiction.  For in this tale, the author weaves a richly atmospheric sojourn reminiscent of Henry James—but without the Gordian sentence structure.

Set in the French coastal city of Dinard, Bell’s literary excursion comes complete with haunted hotel, mysterious portrait, and a helpful female spirit named Louise who favors fireside chats that sound very much like a session in psychotherapy.

“Dear Charles,” she said softly.  “I am not trying to do anything here.  We are simply fulfilling our destinies…

I thought this over and realized that Louise was right, and yet still responded irritably.  “I’m not used to having someone around who’s able to see through me.”

Louise smiled slightly.  “Perhaps it’s a level of intimacy you’re not used to.”  She left the window and took the seat next to mine.  “Charles, I’m really not here to vex you.  If I serve any purpose for you, it is as a mirror of your own conscience.”

Like most of Bell’s fiction, “We have always been the same person” does not present a definite conclusion so much as open the door on several possibilities.  In this case, I prefer to think that Charles, the story’s narrator, will—like the story’s author—eventually find safety, self-acceptance.  Love.

And if I may indulge in one final moment of personal reflection, it is strange for me to consider how my life would have unfolded along a different trajectory had Peter Bell’s not been so tragically curtailed.  Stranger still to consider how the lives, perhaps even the spirits, of people who usually never meet face-to-face—an author and his or her readers—become inexorably intertwined through literature.  Such is the wonder and the mystery of the human quest to create and experience art.  That seems to me a good enough reason to play this small role in sharing and celebrating Peter Bell’s Nocturne—in which his spirit and his artistry remain very much alive.  Page after page.