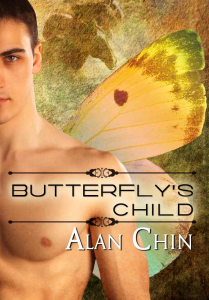 Reading Alan Chin’s powerfully engaging novel, Butterfly’s Child (Dreamspinner Press, 2010) put me in mind of Vito Russo’s groundbreaking exploration of homosexuals in cinema, The Celluloid Closet (book, 1987).  Employing painstaking documentation, Russo exposed the long and sorry history of homosexuals portrayed in film as creatures defined by their sexuality—men (and a very few women) presented as the butt of countless jokes, as victims of violence, and destructive self-hatred.

The trend Russo decried is, of course, no less evident or long standing in literature; think Gore Vidal’s The City and the Pillar (1948), Tennessee Williams’ Cat on a Hot Tin Roof (1955) and Suddenly Last Summer (1959), Mart Crowley’s The Boys in the Band (1968), and, yes—Annie Proulx’s wildly popular 1997 short story, “Brokeback Mountain”.  Even in so small a sample, the reader is hard pressed to find a single gay character who isn’t brought low by self-loathing or worse, destroyed outright—usually by an act of extreme violence.  And while few would question the literary merit of the works cited, it is surely evident that, until relatively recently, there hasn’t been much (at least in literary fiction) that even hints at the possibility of a homosexual “happily-ever-after”.

A few mainstream exceptions do exist; Jane Hamilton’s under-appreciated gem, The Short History of a Prince (1998), Julia Glass’s Three Junes (2002) and its follow-up, The Whole World Over (2006) spring to mind.  And now, count Alan Chin among the growing list of artists—more and more of them, self-identified Indie authors—whose work is helping lay to rest the cruel tradition Russo exposed.  Witness Butterfly’s Child, Chin’s novel of fathers and sons, gay and straight.

Cord Bridger, the thirty-four year old ‘star’ of Butterfly’s Child, is most assuredly gay; but Chin casts his protagonist in 3-D creating in the process a complex, nuanced, fully fleshed, and yes—ever-so-humanly damaged hero.  Cord’s back-story, presented early in the novel, yields suitably operatic clues (a metaphoric link to Puccini’s opera shows up in an early scene) to his psyche.  Paternal abandonment, the subsequent suicide of his mother when he was four, and a youth passed on the culturally deprived high desert plains of Nevada, the reader learns, are the precursors to Cord’s adult existence on the fringes of New York City’s gay A-List.

The bearer of formidable musical gifts, including perfect pitch, Cord’s dreams of a career as a concert pianist—flames stoked by his years at Julliard—have long since cooled to smoke and ashes as the novel opens.  Instead, Cord has ‘settled’ into a long-term stint at Steinway where he is the senior voicing specialist for the company’s concert grands—a career that brings Cord no closer to fulfillment than the fleeting moments of genius he sometimes experiences in tuning Steinway’s expensive pianos.  In many ways, Cord is an instrument awaiting tuning himself, an emotional tuning, that is—a fact that does not sit well with his successful and increasingly dissatisfied lover, Cameron.  In short, Cord’s life in NYC seems almost as lifeless and barren as the minimalist perfection of the Central Park West apartment he shares with his seldom-at-home partner.

All that changes when the necessity of settling his recently deceased grandmother’s estate draws Cord back to the Nevada ranch (appropriately named ‘Bitter Water’) that he abandoned years earlier.  One could argue that Chin’s novel doesn’t take off until Cord deplanes in Nevada.  That is because almost from the moment he returns, Cord confronts a host of jarringly inescapable challenges and responsibilities—not the least of which is the fifteen year-old son (the fruit of a teenage fling) that he never knew he had.

A young man bearing the crushing weight of his own abandonment and long-term abuse issues, Cord’s son Kalin and his seven-year old half-brother Jem soon become Cord’s responsibility in a twist that sets up the series of violent, gut-wrenching confrontations that mark the novel’s climax.  Add to the cast a new love interest in the person of Tomeo, a practicing Buddhist; Jesse, the boys’ strung-out mother and her sadistically violent abuser, Jack (as truly a loathsome villain as this reader has ever encountered in fiction), and Blake, Cord’s estranged father, and you have the makings of a bona fide page-turner.  It helps that Chin, a skillful storyteller, knows how to string the reader along with scenes that stack up and build—sometimes relentlessly, as Cord, increasingly in-tune with what matters, struggles to build and then protect his new family.  The result is that Butterfly’s Child offers an exhilarating, moving, sometimes disturbing journey that nevertheless manages to gallop (literally) to a satisfying conclusion.

Speaking of which, I can imagine that some readers might find Chin’s somewhat tidy, Zen-like finish a stretch (given the formidable violence that precedes it).  Likewise, it is possible some readers may stumble over the novel’s arguably un-necessary metaphoric dalliance with the Butterfly (Puccini’s and nature’s own variety) and/or the overlay of Buddhist philosophy that Chin delivers courtesy of several longish exchanges between Tomeo and Cord.  But, for my part, these do not detract from the novel’s many strengths; indeed, the mini-dissertations on Buddhism seem central to Cord’s eventual arrival at a place of quiet gratitude and contentment.

As for any possible objections to the novel’s gay protagonist-triumphs-over-all ending, I can only wonder how Vito Russo might have addressed that concern—perhaps with an appropriately dismissive “isn’t it about time”?