On Parental Distance and Disappointment 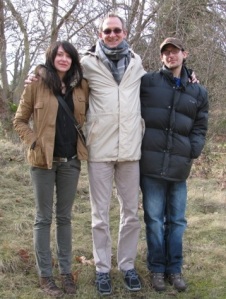 Here is, perhaps, a bit of parental heresy: my two adult children live on the other side of the continent and, at least for now, I like it that way.  This comes not from any lack of love on my part, or, I believe, on theirs; nor does it stem from estrangement.  True, we’ve weathered rough times, my children and I; but by and large we get on well enough.  The phone calls, text messages, and Facebook postings come and go regularly; I make the long trip west to visit when I can.  Rather, this preference of mine (some might say perverse preference) has its roots elsewhere.  Put simply, I have no stomach for witnessing my children’s struggles, and yes—their defeats—from a ringside seat.

For me, watching the inevitable crashes-and-burns of young adulthood up close and personal is just too troubling, too hurtful, and—here it comes—too disappointing.  I realize that bears explanation.  Always the writer seeks a literary comparison; here is mine: getting too close to my children’s lives is something like reading a novel whose writer has unwittingly telegraphed every plot turn chapters in advance.  The result, when the drama finally unfolds, is an enormous let down.  I think young adults often do that—give away the story of their personal and professional lives well in advance of any denouement; they drop subtle and not so subtle hints about plot, setting, character, conflict, symbol, and even their peer’s competing points of view to anyone who will pay attention.  I’m reasonably sure that’s what I did back in the day—tell too much of my story too soon and to all and sundry, including my parents.  Like they say, what goes around comes around.  And these days, it has come around to me.  How much easier it was when my children were little, when I could exercise at least some control over their stories, do a little editing, some occasional re-writing, always hoping that my co-authorship would prove instructive (rather than damaging, God forbid!).  But those days are over, and rightfully so.  When children become adults all rights revert to the author.

But if I’m now to be only the reader of my progeny’s stories, with little or no editorial influence, then, I’d just as soon keep some distance (in thousands of miles) from the narrative—especially the messier chapters (and there have been a few).  I’d prefer to skim those parts and hold out for the happy ending.  Maybe in time this will change and I’ll want to do a closer reading—once all the tedious exposition is done, the most volatile scenes well past, the protagonists better settled in their storylines?  But for now?  Well, here I am, and there they are—way over yonder.

Which brings me back to my distance and disappointment issues.  These, I believe, are not rooted in any inherent disenchantment with, or lack of faith in, my children, but rather in wanting so much better for them than sometimes finds its way onto the pages of their respective life stories.  And, of course, there is the terrifying fear of having to watch helplessly, and close by, when the narrative turns against them, as it inevitably will from time to time.  Like any parent, my wish is that my children should craft the story of their lives far more brilliantly, more fulfillingly than any tale I have ever written or will ever write for myself.  I like to believe they can write those dazzling stories, that—despite the current economic and political dysfunction that so frustrates our youth—they will.  Only, please—not right under Daddy’s gaze.  Unless I’m guilty of egregious self-deception, I’m thinking my preference for distance, my fear of witnessing every ‘disappointment,’ may not be the worst parental failings.

A final thought: it occurs to me that my children might well have their own version of the foregoing ‘tale.’  That is, perhaps in choosing to live so far away from Daddy-Dear, they are coping with distance and disappointment issues of their own.  Could be they’d prefer not to follow from a too close proximity a parental tome already, or most assuredly soon-to-be, on the downside of its story arc.  And if that is the case, wouldn’t it serve me right!

3 Responses to On Parental Distance and Disappointment