My Florida … ambivalence (in words and pictures) by @JackAUrquhart

It’s three years this month (March) since my partner Raymond and I moved to Florida from our former home in the San Francisco Bay Area.  It wasn’t a move either of us sought, but, rather, one that was imposed on us by (mostly economic) necessity.  Nevertheless, we resolved to give my birth state our best shot, and by-and-large, we have.

We settled first in my Central Florida hometown, Apopka—a word that comes from the Timucuan Native American language, and that, roughly translated, means “big potato” or “potato eating place.”  Several months later, we made the move to Mount Dora, a lovely mostly unspoiled town 12 miles north in Lake County.  Since then, there have been lots of good times, as well as some bumpy stretches—some of them pretty scary; but here we are—(still) mostly happy, mostly healthy, and certainly better off than a great deal of the rest of the world.

That said, not a day goes by that Ray and I don’t miss the U.S. West Coast.

So I thought it would be a useful exercise in perspective to document on this blog something of the pros and cons of life here in Florida as I see it—and to accompany those observations with some of the photographs that Ray and I have taken these last three years.  My hope is that this project will help me to achieve a more balanced take on what’s good and beautiful and right under my nose, instead of being forever focused on the things I dislike or wish I could change—instead of habitually yearning for some place else, which, it seems to me, is a great waste of time.

So here goes—my feeble photographic attempt at coming to terms with Florida.

Orange blossoms seem an appropriate place to begin—as their scent frequently wafts into our front yard at this time of year (from a grove a quarter mile away!).  If there’s a heaven, could it possibly harbor a fragrance more divine?

Then there’s the happy, vibrant surprise of springs that sometimes arrive as early as February,

And stretch right through March,

Of course, not to be ignored are the horrible snakes (sorry, herpetologists), in my garden… 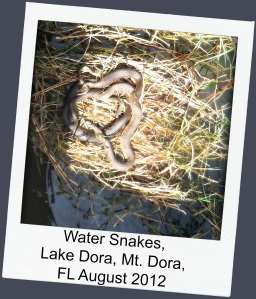 and in Florida’s many lakes.

And we mustn’t forget Florida’s weather, which can be like floating in paradise…

But we also have Towers that sing, 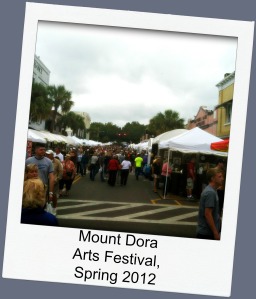 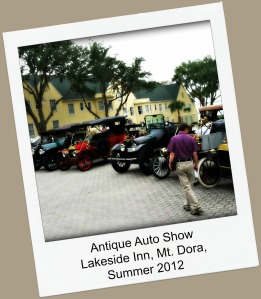 and lots of Oldies

Then again, it’s difficult to ignore the nasty political billboards (that sometimes stick around post-election).

And Florida’s increasing ‘renown’ as the “Gunshine State”. 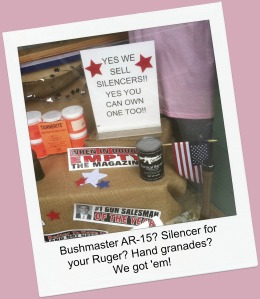 Yet now and then there’s the magic of waking to the Wonderful Wizard of OZ soaring above our front yard;

or to one of Ray’s roses on the dining room table, 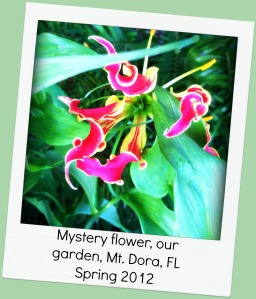 or to the dazzling surprise of a mystery flower blooming amidst the weeds.

There is the gift of a neighbor’s beautiful front yard (flowering in what is for most of the country ‘the dead of winter’), 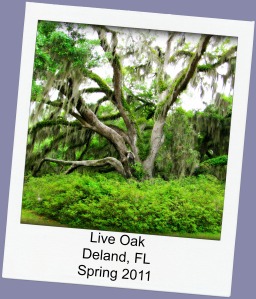 and the wonder of a mossy green giant that has weathered it all for a century or more.

There is the thrill of visiting the place where a favorite book (The Yearling) was written.

And discovering a derelict mansion in the middle of nowhere (Miss Havisham, are you in there?). 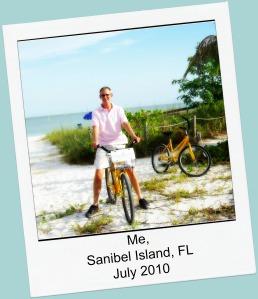 There’s bicycling on a Gulf of Mexico beach (where the sea is almost as warm as bathwater),

and the delight of discovering a Chapel in a grove of old oaks.

There’s the thrill of introducing our gorgeous grandson to a favorite childhood swimming hole,

and (lucky me), any one of a million things that include this wonderful sleepy-headed guy… 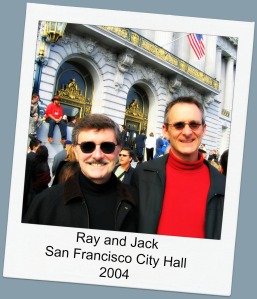 wherever the two of us happen to be.

Even if that’s Florida.

Which isn’t a half-bad home (not that I want to live here forever).

Jack Andrew Urquhart was born in the American South. Following undergraduate work at the University of Florida, Gainesville, he taught in Florida's public schools. He earned a Master of Arts degree in English, Creative Writing, from the University of Colorado at Boulder, where he was the winner of the Harcourt Brace Jovanovich Award for Fiction (1991). His work has appeared online at Clapboard House Literary Journal, Crazyhorse Literary Journal, and Standards: The International Journal of Multicultural Studies. He is the author of So They Say, a collection of self-contained, inter-connected stories and the short story, They Say You Can Stop Yourself Breathing. Formerly a writing instructor at the University of Colorado’s Writing Program, Mr. Urquhart was, until 2010, a senior analyst for the Judicial Branch of California. He resides in southern California.
View all posts by jaurquhart →
This entry was posted in Uncategorized and tagged Apopka Florida, Florida, Florida Photos, Florida Pros-Cons, Florida Stories, Florida weather, mid-life-changes, Mount Dora Florida. Bookmark the permalink.